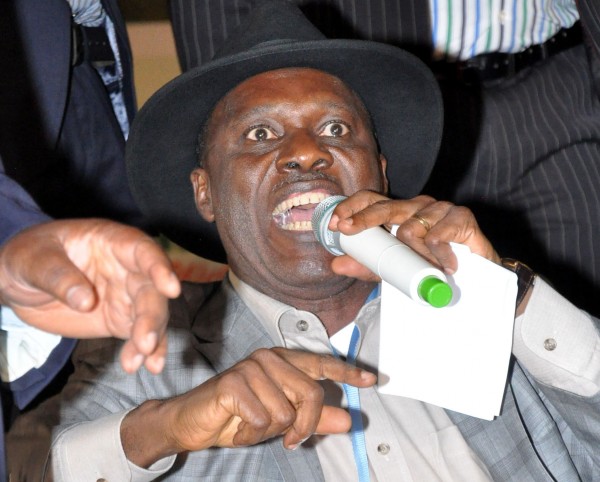 If you Orubebe me, I will Jega you

Following the announcement made by the President-General of the Nigerian Supreme Council for Islamic Affairs (NSCIA), the Sultan of Sokoto, Alhaji Muhammad Sa’ad Abubakar, on Wednesday night, about 100 million Muslims in Nigeria yesterday (June 23, 2015) joined their counterparts across the world in commemorating the commencement of the holy month of Ramadhan. Ramadhan is always a special period because of its significance as one of the holiest seasons in the year. It is synonymous with fasting, which is solely for Allah. “Fasting is for Me and I am the One to reward it”, the Almighty says is a sacred tradition.

As I remarked on this page at this time last year, Ramadhan is a period marked by solemnity and devotion during which conscious efforts are made to improve on the relationship between oneself and God on the one hand and oneself and fellow human beings on the other.

Throughout history, Muslims have taken advantage of the holy season to compete in righteous deeds to renew their commitment to all that is good and noble. The Prophet, Muhammad (SAW), said, “The month of Ramadhan, the month of blessings, has come upon you, wherein Allah turns towards you and sends down to you His special Mercy, forgives your faults, accepts your prayers, appreciates your competing for the greatest good and boasts to the angels about you. So show to Allah your righteousness; for verily, the most pitiable and unfortunate one is he who is deprived of Allah’s Mercy in this month.”

The first thing that Ramadhan evokes today is appreciation. Nigerians especially have every reason to thank God for life and another opportunity to get Nigeria back on track. This time last year, all the bad news in the book, from kidnapping to sheer man’s inhumanity to man, characterized Nigeria. Though there is still a long way to go, this time is much better than how we were last year when there was acute leadership failure.

One important lesson of this period is love, for God, for the nation, for fellow human beings and for the entire creation of God. Love is described as “an emotion of a strong affection and personal attachment, a virtue representing all of all human kindness, compassion and benevolent concern for the good of another”. Love is the heart of faith and the essence of Ramadhan, afterall everyone feels hungry the same way and love is sharing.

The Ashanti people of Ghana have a saying, which is “No matter how badly people treat you, make an effort to always show love in return because there is no medicine to cure hatred.” Ramadhan teaches love as the gap between the rich and the poor is breached as they share the same experience. It is through love that we can heal the world. Nigerians should therefore reflect and realize the need to love one another regardless of ethnic, religious and political affiliations as they share the same nationality and humanity.

Fasting for God’s pleasure also entails self-discipline. It is discipline that makes a fasting person avoid eating when food is available though he is hungry. It is self-control that makes a person avoid all the attractive vices that render one’s fast meaningless. According to the tradition of the Prophet, “Fasting is a shield (or screen or shelter from committing sins). So, the person observing fasting should avoid sexual relation with his wife and should not behave foolishly and impudently, and if somebody fights with him or abuses him, he should tell him twice, ‘I am fasting’….” In this respect, Ramadhan teaches restraint and discipline.

The ultimate significance of the holy season is piety or God consciousness. This consciousness makes one to live the spirit of Ramadhan during and after the month of fasting. In other words, piety as the overarching significance of the holy month entails that a Muslim should Read the Qur’an always, Ask for forgiveness, Maximize good deeds, Attend sincerely to others, Do no harm , Hasten towards virtues, Avoid sins and iniquities and Never be provoked.

To benefit from the month, as the Secretary-General of the NSCIA, Prof. Is-haq O. Oloyede, said in a statement released yesterday, it is essential to appreciate that Ramadhan is actually a period for increased productivity. “This productivity will be achieved through watching less Television, avoiding over-eating, keeping offline most times and reading much of the Qur’an, observing nawaafil and remembering Allah all the time,” he said.

Fasting is solely for the Almighty Allah. The obligation of the fasting person is to fast sincerely to attain His divine pleasure. Fasting is a shield for all.

The reaction of the Peoples Democratic Party to the effusions of a group, which styles itself “PDP Media Watchdog”, is the best I have read from the party in many years. It is eloquent, frank and on target.

Following the submission of President Muhammadu Buhari in South Africa that there is a limit to what he can do at 72, an honest statement if situated within the right context, the group had asked the President to resign. This call is infantile and totally unwarranted for a President that was less than three weeks in office at the time the statement was made.

But in a swift reaction, PDP Publicity secretary, Chief Olisa Metuh, dissociates the party from the statement and disowns the group in its entirety. According to him, “our great party has not authorized this group to use its name, acronym or logo to issue statements or make public pronouncements on any matter and we caution those behind them to henceforth desist from such immediately.” He added that the statement “is completely unacceptable and against the posture of the PDP to engage only on robust and credible opposition while constructively offering alternatives to the programmes and policies of the APC-led government, preparatory to our return to power in the next four years.”

This is one of the best statements to come out from PDP in years. There is no doubt that with the temperament shown by the opposition party, which is a direct reflection of the mood of Nigerians, it may not take so long for the party to win itself back into the hearts of Nigerians.