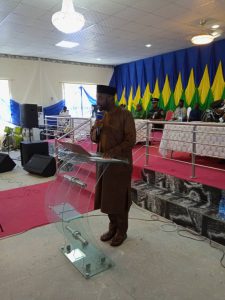 When I received the invitation to deliver the pre-Retirement Lecture of the Commissioner of Police, Taraba State Police Command, CP Alkasim Sanusi, fsi, I assured myself of being there and jokingly told the Police Public Relations Officer (PPRO) that the combined forces of the US President Donald Trump and North Korean Chairman Kim Jong-un would not stop me from honouring the invitation. This was because the CP is a great man of honour, a gentleman officer and most distinguished personality.

As it turned out, the forces I had to contend with were ill-health at the eve of the event and dearth of a connecting flight to Jalingo or even Yola at the peak period. The odds were brazed and I found myself under the blazing sun of Jalingo a day to the event, which held on December 21, 2019. I was glad I did as I was reliably informed that the CP could not afford not having me in person on that major occasion that would herald his retirement, which begins today, from the Nigeria Police Force after 35 years of meritorious service and unblemished career.

It was actually gratifying that in bowing out of service, the retiring CP thought it wise to intellectualise the forum and address the security challenges facing the state as a way of seeking further solutions. As a mini-Nigeria, with a complex mix of ethnic, religious and political cross-currents, Taraba State is usually at the edge as any threat to peace can happen at any moment and metastasize to a seething cauldron of violence.

Speaking on “Towards Transforming Communal Conflicts and Engendering Peacebuilding in Taraba State” at the well-attended occasion, I zeroed on leadership as a major requirement needed to address the hydra-headed problems confronting Nigeria. In Taraba State, these problems converge largely on ethno-religious and farmer-herder conflicts, which constitute communal conflicts, that the state continually contends with.  And, in theorising leadership, I considered it what is between everyone’s purview in line with the prophetic conception of everyone as a leader or a shepherd responsible to some flock.

In other words, everyone is a leader, not only those who occupy political, traditional, religious and other formal and informal leadership positions. So, no one can pass the buck; it is everyone’s responsibility to be part of the solution, not only focusing on some distant leaders while idling and fritting away valuable time. In essence, the humungous monstrosity of religious bigotry, ethnic jingoism and prebendal politics can only be tacked if all hands are on deck to confront them through unity of purpose.

This unity of purpose is predicated on the need to realise that human beings share the same ancestry through our progenitor, Adam. As a matter of fact, if blood relationship and ethnic uniformity were to be a solution to conflict, the first violent conflict would not have happened in the savage murder of Abel by his brother, Cain, and Somalia would have been a haven of peace, which it is not. The best approach to relating with others is to be open-minded, think out of the box, see the big picture, let go of ego and seek beyond primordial sentiments in identifying our commonalities as a people.

As ignorance is a misfortune, it is possible for a person to be fighting his own people without realising it. I didn’t know the ancestral and historical connection between the Yoruba and the Jukun until I met the Chairman of the Taraba State Traditional Council and Aka Uka of Wukari. If the Yoruba are related to the seemingly distant Jukun, the same link exists among other communities and neighbours who fight one another without realising that we are all inter-connected and inter-dependent in a number of ways. Herders need crops that farmers grow for food and farmers too cannot eat without meat, usually. Besides, lack of discernment would make Muslims and Christians fight without realising that their religious values are the same as evident in teachings of the Qu’ran and the Bible.

While it is necessary to make conflicts functional through healthy competitions in sports and academic debates or engagements, it is desirable to deploy the conflict management styles of accommodation and compromise, which emphasise win-win and bend-bend solutions rather than those that emphasise lose-lose and lose-win or zero sum options. This is where differences will be transformed to friendship and solidarity, the examples of which are visible in Rwanda and Ethiopia.

While President Paul Kigame has turned Rwanda to an oasis of development having transformed the deadly conflicts of the Hutus and the Tutsis, with forgiveness advanced as a transformational method, not revenge or even ‘justice’, since an eye for an eye leaves the whole world blind,  Dr Abi Ahmed has through accommodation and compromise resolved the bitter border conflict between his country and Eritrea and transformed some internal conflicts of the country, gaining the attention of the world and winning the Nobel Peace Prize after just a year in office.

This is why to transform our conflicts and overcome our challenges in Nigeria, it takes us all as leaders at all strata to do the needful in terms of maintaining social justice, deploying preventive diplomacy, promoting peace education, facilitating  inter-religious dialogue, providing good governance including employment opportunities, being our brother’s keeper, deepening democratic culture, championing political inclusion, embracing Alternative Dispute Resolution, engendering rule of law, giving social security to people and practising responsible and development journalism.

Apart from serving as a cultural ambassador to the US under the auspices of the Institute of International Education (IIE), New York, Prof. Adedimeji had won or co-won the research and conference awards/grants of the Tertiary Education Trust Fund (TETFund) of the National Research Council, Nigeria, the Council for the Development of Social Science Research in Africa (CODESRIA) and the Association of Commonwealth Universities (ACU). He has written extensively for a wide range of newspapers and periodicals including “Unilorin Bulletin”, “Unilorin Watch”, “DeLight”, “National Pilot”, “Daily Independent”, “Newswatch Times”, “New York Parrot” and “New Telegraph”, among others.

A versatile academic and award-winning scholar, Prof. Adedimeji  has attended academic conferences and undertaken research in several  universities across Nigeria as well as in Ghana, Cameroon, Kenya, Malaysia, Sierra Leone, Australia, France and United States of America, among others. His hundreds of academic, Islamic  and general/opinion articles have been published across outlets in Nigeria and beyond. He has also facilitated and participated in seminars and workshops both nationally and internationally.

A former Deputy Director/ Head of the Directorate of Corporate Affairs of the University of Ilorin, Prof. Adedimeji was the Director of the Centre for Centre for Peace and Strategic Studies, University of Ilorin, between 2013 and 2017. Apart from serving as Rappouteur-General to the Presidential Committee that organised the 2017 Federal Executive Council’s Retreat on Education in Nigeria, he has consulted for the Nigerian Supreme Council for Islamic Affairs (NSCIA), Nigeria Inter-religious Council (NIREC), the Nigerian Security and Civil Defence and Corps (NSCDC) and the United Nations Development Programme (UNDP).

For years, he was a Coordinator and Facilitator of the Executive Management Course of the Nigerian Army Education Corps (NAEC) and Editor-in-Chief of the “Journal of Peace, Security and Development”, University of Ilorin. He has also served as a resource person to agencies like the Joint Admissions and Matriculation Board (JAMB), National Orientation Agency (NOA), National Institute for Security Studies as well as a number of Civil Society Organisations.

A Fellow of bodies like the Institute of Corporate Administration, Nigeria, Society for Peace Studies and Practice and World Institute for Peace, Prof. Adedimeji is a former Member of the Governing Council of the International Peace Research Association (IPRA) and Member of the Executive Council of the English Scholars’ Association of Nigeria (ESAN). He has written, co-written, edited and co-edited more than a dozen books.