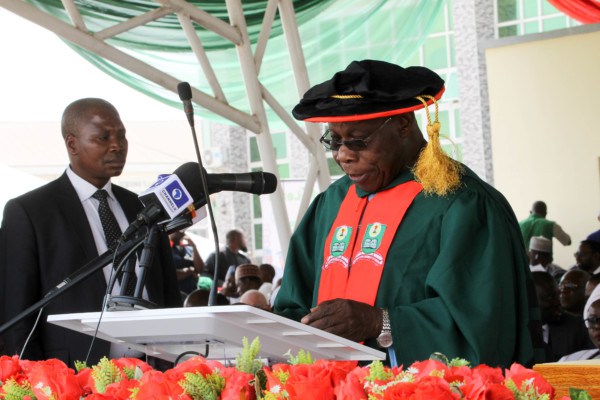 Be inspired by Obasanjo

There is no controversy about the goal of every human endeavour, it is to attain success. Everyone wants to be successful in school, in business, in politics, and ultimately in life. The overarching motivation behind our toils is to be successful. Everybody wants success in life; nobody wants failure.

However, what constitutes success varies from one person to another. Ask an average Nigerian, to be successful is to make a good grade, get a good job, have a good spouse, live in a good apartment, own good cars – everything good. To many people, being successful is being famous, rich and powerful. It is the crave for success that leads some people into crime.

It is normal for students to dream big and aim high. But it is important that they understand what success actually stands for in order not to derail. I just saw a clip on how the quest to be “successful” led some young Nigerians to an Asian country where they ended up in the hangman’s noose.

Bill Cosby was said to have remarked that he did not know the secret of success but the secret of failure was trying to please everybody. Yet, the secrets of success can be found in success itself. Therefore, we can say S.U.C.C.E.S.S. entails seven things or secrets, each represented by a letter.

The first success secret is Sincerity of intention. You want to be rich – for what reason? Is it to help the needy, assist the poor, empower the people or to contribute to human development? Is it to oppress others, exert revenge and boast to the world you have “arrived”? Your actions are judged by your intention. To be successful, be sincere.

The third letter represents Contentment. Without contentment, one is prone to a life of worry, anxiety and sadness. The principle here is to put in one’s best in every endeavour and be contended with one’s portion. Not everyone will own a private jet, for example. As Rajinikanth once said, “Whether you have a Maruti or a BMW, the road remains the same. Whether you travel economy or business class, the destination doesn’t change. Whether you have a Titan or a Rolex, the time is the same. Whether you have an Apple Samsung or a Lava, people who call you remain the same. There is nothing wrong dreaming a luxurious life. What needs to be taken care of is to not let the need become greed. This is because needs can always be met but greed can never be fulfilled.”

The fifth letter is Excellence. You have to excel to succeed. A student who wants to succeed in life must begin by excelling in his studies. The same thing is applicable to an artisan. To succeed, he must be excellent in his craft such that people would seek him. Even if good grades do not automatically lead to success in life, they are closer to success than bad grades.

Lastly, as no success is achieved on a platter of gold, anyone who wants success must embrace Seriousness, which is the secret of the last letter. If you are not serious in anything you do, you will not succeed in it. That is why in all matters, seriousness is key.

Whether in the micro world of the school or the macro world of the society, unlocking the secrets of success is our responsibility. When one works with the secret, one’s success is guaranteed. If the anticipated success does not come immediately, it is definitely deferred till the best time, which is God’s time.

Re: Be eagle, not duck; soar, don’t quack

Worry can’t help but make someone be in one spot with no result. In a competitive world, solutions to problems should be paramount to someone that wants to survive. Thinking beyond the present can also help someone to become an eagle in a chosen career or trade. – Aina Akindele Oyebanji, Ketu, Lagos State.