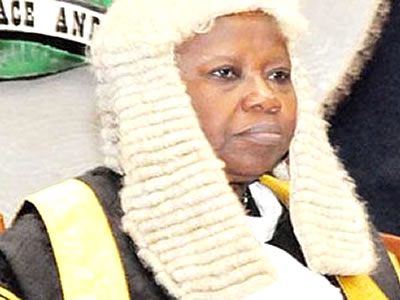 Democracy without decorum, courts without justice

On Thursday, January 23, 2015, which was barely three weeks to the date originally set for the 2015 presidential elections, the National Security Adviser to former President Goodluck Jonathan, Col. Sambo Dasuki (rtd), was in Chatham House, London, where he delivered a lecture on “Nigeria’s Security: Insurgency, Elections and Coordinating Responses to Multiple Threats”. One of the high points of the lecture was canvassing the postponement of the elections, which was exactly what happened.

In his assessment of the military operations to defeat Boko Haram insurgency, during the question and answer session, he noted that “we have a few cowards” and mentioned the then ongoing court martial. “If somebody does not behave in a manner that is befitting of his profession, he is treated by what is proscribed by law. That is what is going on, ” he said.

However, what is going on now has revealed that God saved Nigeria from the open jaws of unimaginable disaster. As Nobel laureate Wole Soyinka recently said on Channels Television, Nigeria would have been completely ruined had Jonathan returned to power, given the sheer enormity of the humongous loot that was perpetrated under his watch chief among which was Dasukigate.

Though the excuse given was insecurity, one primary reason for the postponement of the elections was that the government at the centre, as then constituted, and the former ruling party, the Peoples Democratic Party, were jittery about the prospect of losing the elections. Between January and March 28 that the elections were held, several billions exchanged hands and former President Goodluck Jonathan travelled wide from churches to palaces, some added shrines, to alter the course of the impending loss starring him in the face. All manners of real and ghost groups in Lagos and elsewhere had their own fair share of the dollar and naira rain.

However, the reality that is progressively dawning on Nigerians is that the money meant to prosecute war and procure arms, hence save thousands of Nigerian lives especially in the North East, was simply stolen by the yam eaters. Under the cover of security advisory, billions of naira that could have saved lives, provided employment and ensured needed infrastructure was wasted for political expediency.

In specific terms, the former NSA is reported to have got some $2.2 billion for phony arms purchases. From this money, the controversial media mogul and AIT/Raypower owner, Raymond Dokpesi, allegedly received N2.1 billion for publicity while the former Governor of Sokoto State, Attahiru Bafarawa, received N100 million for “spiritual purposes”. The former Minister of State for Finance, Bashir Yuguda, not to be outdone, also received N1.5 billion for some other purposes. In the days ahead, most likely, the names of more yam eaters will come to the fore.

The Office of the National Security Adviser (ONSA) was effectively a conduit pipe for all kinds of corruption and diversion. At least, additional N61.4 billion ($300 million) was still transferred to ONSA from the funds recovered from the late General Sani Abacha, by the former Minister of Finance, Dr Ngozi Okonjo-Iweala, as recent investigations have additionally revealed. The way all kinds of illegal transfers and money laundering was done is sense-numbing, especially with the revelation that additional N643 billion is also missing, implying that the total amount of money that grew wings and flew to private pockets was about $6 billion.

While the exposure of all these dirty deals is cheering, the problem is that the masses will always be at the receiving end. Except there is a difference, the Nigerian experience with all the drama of revelations and court excursions is that some big lawyers will intervene, money will exchange hands and there will be quiet.

The submission of Mr Femi Falana SAN is here instructive to the Federal Government: “As corruption is already mobilizing to fight back, the Buhari administration should ignore the reckless campaign of calumny of certain people who have lost their sense of shame. As far as they are concerned, the suspects should be left alone to enjoy their loot while soldiers are losing their precious lives due to lack of adequate weapons. The federal government should ensure that all individuals and corporate bodies indicted in the criminal diversion of public funds are made to face the full wrath of the law.”

Anything less than that will be a travesty of trust and a betrayal of the long-suffering Nigerians who invested their hope in change.

THUMPS DOWN FOR DONALD TRUMP

When the Islamophobic US Presidential candidate, Donald Trump, decided to up the ante of his hate-filled outbursts against Muslims, he probably didn’t expect the backlash. He thought it was thus another salvo in a long list of verbal expletives to please the well-oiled hate industrial complex.

However, it appears his thoughtless quip is generating considerable attention. Many reasonable people are comparing him with Adolf Hitler during the World War II. Adolf Hitler used racism to rise to power, proposed mass deportations, promised to make Germany great again, was an anti-Jew Fascist, blamed Jews for Germany’s problems and thought Jews should wear special ID’s. This is exactly the same thing Trump is doing or proposing when we replace Germany with US and Jews with Muslims.

Now, more than 700,000 people, at the last count, have signed an e-petition in Britain to ban Trump from visiting the UK. Trump has also been stripped of his status as a Scotland’s business ambassador by Scotland’s Prime Minister, Nicola Sturgeon.

Besides, Aberdeen’s Robert Gordon University has revoked the honorary degree bestowed on Trump in 2010 in recognition of his achievements as an entrepreneur. Then, Lifestyle, one of the Middle East’s largest retail chains has withdrawn Donald Trump products from its shelves.

One thing is incontrovertible: whether Donald Trump emerges the US President next year or not and regardless of the fire of his anti-Islamic tantrums, Muslims in the US and elsewhere will survive him and his co-haters, just as Jews survived Hitler.