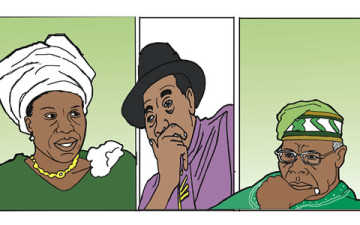 President Goodluck Jonathan is fast losing the goodwill he attracted to himself from Nigerians by his shocking predilection for firing and hiring people at the tail end of his inglorious tenancy in the State House. It is becoming increasingly obvious, a justification of the perception of the cynics, that his well-applauded congratulatory call to General Muhammad Buhari was done rather involuntarily.

How else does one explain the desperate recourse to firing and hiring being done with more brazenness after he lost the March 28 presidential elections? At the end of the day, if care is not taken, what he will be remembered for may be his last minute firing and hiring shenanigans, the desperate antics of a bad loser intent on creating “bad blood” for his successor, who is duty-bound to reverse his eleventh hour political gimmicks.

After firing the former Executive Secretary/Chief Executive Officer of the National Health Insurance Scheme, Dr Femi Thomas, and hiring Mr. Olufemi Akingbade in his stead, he proceeded to fire the Managing Director of the Nigerian Ports Authority, Mallam Habib Abdullah, before hiring Alhaji Sanusi Lamido Ado Bayero to occupy his seat. As if that was not enough, there was a sacking spree in the aviation sector involving such top officers like George Uriese of Federal Airports Authority of Nigeria (FAAN), Fola Akinkuotu of Nigerian Civil Aviation Authority (NCAA), Nnamdi Udoh of Nigerian Airspace Management Agency (NAMA) and Capt. Chinyere Kalu, Rector of the Nigerian College of Aviation Technology (NCAT). The dust has not fully settled on the dramatic axing of the former Inspector General of Police, Mr Sulaiman Abba.

However, a stern objection has been raised against the re-constitution of the sensitive National Hajj Commission (NAHCON). The highly principled and incorruptible former Vice-Chancellor of the University of Ilorin and Secretary-General of the Nigerian Supreme Council for Islamic Affairs (NSCIA), Prof. Is-haq Oloyede, petitioned the Senate last weekend against the latest affront against his constituency.

In the letter dated May 9, 2015, on “strong objection to the confirmation of new NAHCON nominees” the NSCIA raises serious issues that border on due process while drawing attention to “the submission of some names as members of the National Hajj Commission (NAHCON) to the Senate for screening and approval.” A large portion of the petition reads:

“The NSCIA wishes to register its opposition to, and disapproval of, the hurried process that engendered the recent re-constitution of the National Hajj Commission (NAHCON). We want to aver that though the tenure of the Chairman and some (not all) current members of the Commission ends three or four days to the end of the tenure of the outgoing Government, it is baffling why there is an unusual urgency to re-constitute it at this material time.

“It would have been proper to ask a Permanent Commissioner whose tenure still subsists beyond 2015 to act as Chairman after the 24th of May to allow for statutory consultation and filling of vacancies in the 19-member Commission. This has been the case on several occasions in other Commissions, Federal Character Commission, FRIS and PENCOM instead of this hurried and improper re-constitution of the Hajj Commission, some four or five months away from Hajj.

“The way and manner in which the re-constitution is done smack of bad faith and symptomatic of a sinister plan to cause friction and disaffection within the Nigerian Muslim Community while covering up some irregularities. Even if it is not illegal, technically, to re-constitute the Commission, it is immoral and unprocedural more so that the Commission is charged with the administration of a sensitive assignment about which 80 million Nigerian Muslims are concerned.

“It has always been the practice to consult with the leadership of the NSCIA pursuant to Section 3 (2) of the NAHCON Act, which stipulates “due consultation” as expected of an agency charged with the huge responsibility of handling an Islamic rite of this magnitude. The Government failed and neglected to comply with this fundamental statutory provision in this nomination.

“It is intriguing that it is the same Federal Government that designated the President-General of the NSCIA and Sultan of Sokoto, H. E. Alh. Muhammad Sa’ad Abubakar, as the Permanent Amirul Hajj. Yet, the NSCIA is aware that he was not informed, not to talk of being consulted, in carrying out the latest exercise.

“It is apparent that there is a double standard in dealing with Muslims as we learn on good authority (and as stipulated in Section 2 (2) of the NCPC Act) that the leadership of the Christian Association of Nigeria (CAN) was consulted before the constitution of the Nigerian Christian Pilgrim Commission (NCPC). This is evident in the person of the Executive Secretary and the members of the Commission, who are evidently representative of the various interests and groups within Christendom in Nigeria.

“We deem the action of the Federal Government as a calculated attempt to embarrass the Nigerian Muslim community or to slight it for whatever offence it is deemed to have committed.   It is puzzling that the same Government which contacted the leadership of the NSCIA with a proposal (which we unequivocally supported) to disengage from direct Hajj activities, is sidelining the same NSCIA on the issue of Hajj management. Despite the high level of integrity and firmness of the current Chairman of the Commission, the direct involvement of the Federal Government in Hajj has been anything but salutary.

“It is against the backdrop of the foregoing that we urge the Senate under your astute leadership not to lend its weight to this flagrant abuse of due process. We are also aware that a diligent check of the Senate records will reveal one or two other embarrassing facts about the list hurriedly put together without proper and necessary scrutiny.

“The NSCIA has chosen to appeal for non-approval of the list to avoid a situation where the respected Senate will be deceived into approving what should not be approved if all relevant facts are sought and obtained. Fortunately, there are checks and balances in our democracy, represented in this case by the legislature. We are therefore optimistic that the impunity that the latest step engenders would not be allowed to stand or be dignified by your esteemed Senate.”

It is left to the Senate to do the needful or play to the gallery.

DON’T DUCK: OKUPE IN THE DOCK

News broke out during the week that the Nigerian Deposit Insurance Corporation (NDIC) has dragged the voluble Senior Special Assistant to the President on Public Affairs, Dr Doyin Okupe, to court over his unpaid debts. Dr Okupe should honourably pay his debt, a “paltry” N34,168,064.51 only lest someone ducks or perceives his prosecution by a government agency as persecution even while Okupe is still in power.

How much is the money “sef”? Pay up, Mr. Buhari-can-never-be-the-President-of-this-country, don’t duck!