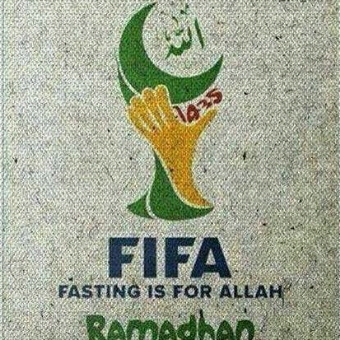 RAMADHAN: FASTING IS FOR ALLAH (FIFA)

The keenly-contested last presidential election has come and gone but the thrills and frills of it would continue to endure for some time to come. Chief among them was the creative propensity and imaginative fecundity of Nigerians, which made the period interesting for many people, especially those on the ubiquitous social media.

Apart from “fear North”, a striking pun (or paronomasia) of the Biblical “fear not” that was coined when the largely pro-Buhari social media activists wanted to assure themselves that the votes of the North would “swallow” the large votes coming in from the South, and the photograph of two lions, marching majestically with the caption, “Borno and Sokoto Arriving” on March 31 evening, the ace is “If you Orubebe me, I will Jega you”.

“If you Orubebe me, I will Jega you” is a figure of speech known as antonomasia and it has far-reaching moral lessons bordering on self-control, public conduct and anger management. But the expression will not make much sense without tracing the origin of the analogy. The original expression is also rooted in the Nigerian political history when “If you Tarka me, I will Daboh you” was coined by a prominent Nigerian columnist, Gbolabo Ogunsanwo.

As we are reminded by Mr Tola Adeniyi in his “If you ‘Nyako’ me, I will ‘Jonathan’ you” (another off-shoot of the original expression), the year was 1974 and the former Minister of Communication under General Yakubu Gowon, Mr Joseph Tarka, was making fuss about the stance of Government against corruption. His kinsman from the same Benue State and “loud anti-corruption crusader”, Godwin Daboh, seized the opportunity to expose the Minister. Tarka had earlier stepped on Daboh’s toes and it was payback time for Tarka as the “wikileaks” in the newspapers ultimately led to Tarka’s sack or resignation from Gowon’s cabinet. So, the coinage resonated across the country: “If Tarka me, I will Daboh you”; life is tit-for-tat.

Back to the Orubebe-and-Jega saga, for many Nigerians and the rest of the world, March 31, 2015 will not be forgotten in a hurry. It was a tense day that many people became emergency accountants juggling and adding figures as they were glued to their television sets. The venue of the action was the International Conference Centre, Abuja, and the Chairman of the Independent National Electoral Commission (INEC), Prof. Attahiru Jega, was about to continue with the business of the day, the continuation of election results announcement started the previous day.

Then, the Peoples Democratic Party agent, Mr Godsday Orubebe, took the microphone and sought to disrupt the announcement process, raining invectives on Prof. Jega. “Let the world know Jega is partial!”, he shouted many times, on some occasions poking his fingers at the unperturbed Jega in the full glare of the watching world. The behaviour was unruly and shameful because Mr Orubebe could have chosen his words more carefully and behaved more maturely.

However, Prof. Jega’s reaction was classical, a practical manifestation of the dictum that no one can provoke you without your cooperation. Despite the abuse and theatrics, Jega maintained an admirable calm and inspiring gracefulness. When Mr Orubebe realised his attempt to provoke a similar response from Jega failed, he retreated, it was then Jega’s turn to respond. He dissected the issues raised into two and addressed them satisfactorily, winning a spontaneous applause from the audience.

Then, he gave Orubebe a lecture that was spot on: “Mr Orubebe, you are a former Minister of the Federal Republic. You are a statesman in your own right. You should be careful about what you say or what allegations or accusations you make. Certainly you should be careful of your public conduct.” The response went viral as it was considered fantastic. The lecture was so impactful that nothing was heard of Orubebe again till the process ended. It was shortly after the exchange that the expression, “If you Orubebe me, I will Jega you” was born.

Both “Orubebe” and “Jega” were also imported into the English lexicon, with their etymologies humorously traced to Latin, to describe what the two did. Besides, a new medical condition, “Orubebetisis” was also discovered and described thus: “an acute inflammation of the reasoning faculties caused by sudden excessive proliferation of the Rubebe virus in the adrenal glands resulting in an excessive burst of adrenalin. Symptoms include: sudden burst of anger, shameless conduct in public, aggressive speech, disruption of peace and orderliness and general misbehaviour. This virus is commonly exhibited by touts, ex-militants, okada riders, bus drivers and others of similar class. Though present in the general populace, the virus is rarely exhibited. In acute cases, a quick, single dose of Jegaquine will produce rapid results within a few minutes.”

The scenario made me to pray, as written on my Facebook wall after the event, “O Allah, endow me with the calmness of Jega at the height of provocation! Protect me, family and friends from the self-humiliating shenanigans of Orubebe! Let me triumph before the eyes of my enemies and detractors like Buhari!”

When the eccentric and Buhariphobic Governor of Ekiti State, Ayodele Fayose, congratulated the President-elect, General Muhammadu Buhari, before the final results of the recent Presidential election was announced, every discerning Nigerian could smell that he was being clever by half. Having realised he was sitting on a stolen mandate and he had taken his anti-Buhari antics beyond the realms of decency, the embattled Governor has been running from pillar to post since the election turned out the way it did, contrary to his expectation.

It is clear to Fayose that like Humpty Dumpty, he will fall but he wishes to delay the time. Finding himself in the ring, he discovers he cannot run away from his destiny, he can only hide. It is not the question of IF he is going to vacate the office, it is the question of WHEN. Like a leaf severed from the tree by a hostile wind, despite the gyration and fluffing in the air, the fall is imminent.

Mr Fayose’s name is already engraved in history. He is likely to be impeached twice if he does not resign. When he was shredding a judge’s robe and unleashing thugs on the judiciary, he did not know he would still need the protection of the law. When he was wishing Buhari dead, he forgot there is tomorrow. When he was throwing stones, he forgot he was in a glass house. He is a good lesson of how not to be a politician. He richly deserves his troubles.