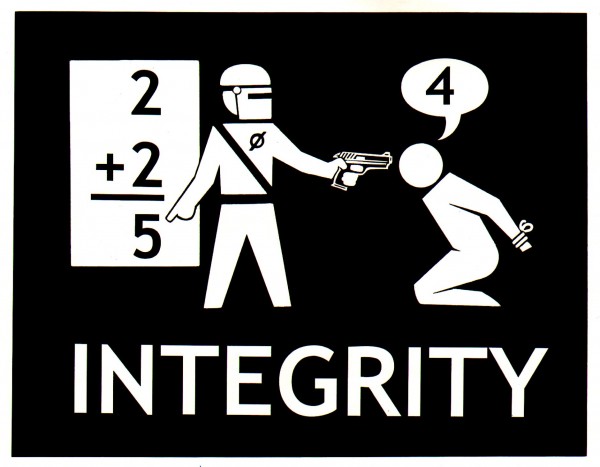 While speaking at the opening ceremony of the 28th Annual Conference of the Nigerian Mathematical Society hosted by the University of Ilorin on June 23, 2009, the former Vice-Chancellor of the University and President of the Association of African Universities then, Prof. Is-haq Olanrewaju Oloyede, said something that stuck to my skin. It bordered on an aspect of our education that is often taken for granted.

According to him, “we must allow our education to permeate our lives. We must not be an accountant who does not have a personal budget. We must not be a doctor who is drunk. We must not be a policeman who aids and abets corruption, which he exists only to eliminate and curb. We must not be a Customs officer who wears a contraband uniform. We should not be leaders who will not promote law and order in the society.”

However, the irony is that what he advocated against is the reality of Nigeria where we have more degrees and less as people do not practise what they know or are supposed to know. As he said, it is real that we have accountants who do not have their own personal budgets. We have doctors and medical students who smoke and drink, though they know that such habits are injurious to health.

Today, we see religious leaders who promote hatred and utter incendiary statements because of vain political expediency and we find teachers who connive with students and parents to cheat. We have lawyers who break the law and we know how some criminally-minded people in high places decide to study law for the purpose of knowing how to break it with ease. We find journalists who misinform the public and media houses publishing rumours with some of them losing credibility and reputation in the process.

While the issue of policemen aiding and abetting corruption is commonplace among us, we also have political leaders who overtly or covertly promote violence. Yet, we know that the purpose of government is to sustain peace and maintain law and order. There are states in Nigeria today where senior government officials are known to connive or sponsor thugs and unskilled workers to foment trouble in order to score some political points. We have people going to school, acquiring certificates and obtaining degrees without being “educated”. We have people who go on strike and later get paid for the work not done. Our education has been reduced to acquiring more degrees, which do not often translate to sense.

George Carlin, the late American philosopher-comedian, who inspired the title of this piece, lamented this contraction when he x-rayed the paradox of our modern life when wrote that “we have taller buildings but shorter tempers, wider freeways, but narrower viewpoints. We spend more, but have less, we buy more, but enjoy less. We have bigger houses but smaller families, more conveniences, but less time. We have more degrees but less sense, more knowledge but less judgement, more experts but more problems, more medicine, but less wellness.

“We’ve cleaned up the air but polluted the soul. We’ve conquered the atom, but not our prejudice. We write more, but learn less. We plan more, but accomplish less. We’ve learned to rush, but not to wait. We build more computers to hold more information, to produce more copies than ever but we communicate less and less.These are times of fast foods and slow digestion, big men and small character, steep profits and shallow relationships. These are the days for two incomes and more divorce, fancier houses but broken homes….”

It is therefore desirable for students think of what they can do with their education, the value they can add to the society with their training despite the harsh socio-economic situation, while they are still in school. At the risk of repetition, an “educated” person would not behave like that graduate of Ekiti State University who wanted to commit suicide by jumping on the main road from a moving vehicle in Uyo, Akwa Ibom State, last month because he had been seeking a job without success for 10 years. He had been wrongly wired to assume that the sole purpose of education is to seek employment, not to help himself with his knowledge.

This is what Imam Ghazali wrote on putting translating knowledge to action. “Let it be known very well that knowledge will not save a person unless it is put into practice. Let me clarify this point with an example for you: supposing someone fully armed suddenly met a lion in the mountains, no matter how brave and how good he might be in using a gun and a sword, could not save himself from this lion unless he used his weapon? By the same token, however deeply learned a person may be, his knowledge will come to naught if he does not act upon his knowledge.”

What we need is to act on what we know and avoid the syndrome of more degrees and less sense.

As we go through the trying times of many people talking before thinking thereby heating the polity, we should always remember Robert Frost’s definition of education: “Education is the ability to listen to almost anything without losing your temper or your self-confidence.”